Green Ginger Garland were formed in the autumn of 1977. The team’s name derives from the street called the Land of Green Ginger in Hull’s old town. 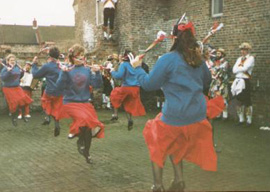 Green Ginger Garland began in the autumn of 1977 when a visiting friend suggested the ladies might do some Morris dancing and suggested North West or Garland. Garland appealed, and a group formed to learn Paper Flowers and “A French Garland Dance” (now known as Waving). This original group all had links with Folk Union One in Hull, and in many cases were already members of Green Ginger Clog or the Green Ginger Country Dance teams. Some members of this original group moved on to found Middleton Garland Team, which has since become Beverley Garland Dancers.

Green Ginger Garland first danced out in December 1977 at the Christmas Ceilidh. Initially they practised at the Pacific Club in High Street, in a room with mirrors. In the summer the team gave the first of many appearances at the dance displays in Queen’s Gardens. Here the team leader danced on at the beginning of Waving and realised that not only had she lost count of how many dancers had come on behind her but there was also no mirror to check it in.  She was saved by a member of the country team who saw her panic and mouthed 6… 7… 8… Now! This incident is told to new dancers as a cautionary tale to warn against using features of the practice hall to know where you are up to. 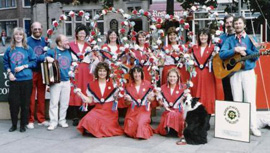 In the early days, Green Ginger Garland appeared as a Folk Dance Road Show including the Morris Men, the Clog Team, the Country Dance Team and the Garland team. In practice this meant a lot of quick costume changes, especially for the ladies. To make this easier the original Garland costume incorporated the long-sleeved white blouse from the country dance costumes.

The Road Show toured in Holland and the Garland team later toured there alone. The team were memorably asked to dance on North Sea Ferry and had their garlands carried off the ship by an appreciative group of squaddies! 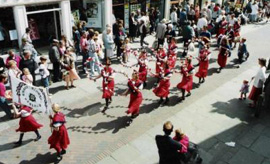 Green Ginger hold a New Year’s Eve Ceilidh every year, which sees us dress up and perfrom a ‘party piece’. Our Maypole dancing and Bunny Girl rapper sword dancing act have been particular highlights over the years! The team also continue to dance out each Boxing Day and for a number of years have performed The Holly and the Ivy at the Ceilidh afterwards.

In 1994, at Princes Quay shopping centre in Hull, our dancing was filmed from the balcony, giving a great view of the patterns.

We pride ourselves on being able to finish dances, whatever happens. Primrose at Stainsby was the exception. Some say the stage sloped, others that it was a hot day and the chilled beer was very refreshing. What we do know is that the dance slipped inexorably into a corner until we had nowhere to go but off the edge…

The garland dancers have thoroughly enjoyed competing, with a great degree of success, in Whitby Competitive Folk Song and Dance Festival over many years. Memories include painstaking efforts to find the middle of the stage, many memorable comments from the adjudicators and, best of all, the meal out afterwards! 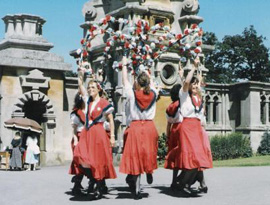 Green Ginger Garland have also danced at each Beverley Folk Festival since the event was launched. We regularly danced out at fetes and local festivals – in care homes, pubs, stately homes, visitors’ centres, castles and on many a street corner. We had a great time at the Durham Folk Party, Whitby Moor and Coast and Rochester Sweeps festivals, and more recently we have also taken part in the Chippenham Folk Festival.